The demand curve is a line graph used in Economics to show the relationship between the units of goods purchased at different prices. When we see a shift in the demand curve, it means that some factors have led to a change in the quantity demanded. The shift in the demand curve could be towards the right or left. The direction of the shift indicates the increase or decrease in demand. There can be various reasons for this shift; to understand them better, let us discuss them in length. 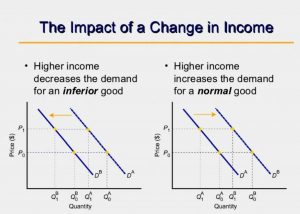 Normal Goods experience an increase in demand with the increase in the income of the consumer. It means that when the income of the consumer increases, the demand curve shifts to the right. A salary hike encourages people to buy more quantities of the goods they prefer. The fact that our wants are unlimited gives a push to buy more. On the contrary, a reduction in income will move the demand curve for normal goods to the left.

Inferior goods experience a decrease in demand with an increase in the income of the consumer. It means that when the income of the consumer increases, the demand curve shifts to the left. The word “inferior” suggests that these are goods of low quality and are in demand only if people don’t have enough money to afford better quality products. An example of this can be derived from people who commute on the bus due to a lack of funds to travel via an airplane. Once their income increases, their purchasing power will increase and they will buy an airplane ticket thereby reducing the demand for bus rides. On the contrary, a reduction in income will move the demand curve for inferior goods to the right. 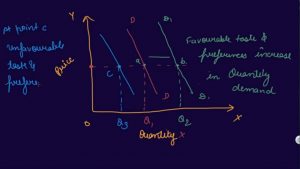 Consumer behavior is highly influenced by the ongoing trends that come into fashion. This factor is responsible for shifting the demand curve towards the right. Also, when a trend/fashion style becomes obsolete or is replaced by a new trend the demand curve for the specific goods can shift towards the left. This is a repetitive cycle because it is influenced by human behavior. This is the reason why fashion trends and dressing styles keep on changing with the passage of time. Clothes that enjoyed high demand in the 90s are not preferred anymore because of changes in trends and tastes of people.

Most commodities, goods, and services have their substitutes and complements. Each of these affects the demand and causes shifts in the demand curve. When there is a fall in the price of one good and it results in a decrease in the demand for another good, it is a case of substitute goods. So, substitute goods can replace one another whenever there’s a change in the price. Let us understand this with the help of an example. When there’s a reduction in the price of ice cream, people will buy more ice cream and ditch candy bars. Both of these are sweet but ice cream’s price is less so it becomes more affordable while fulfilling the same need for other desserts. 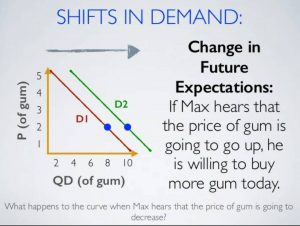 Another factor that impacts the changes in demand is related to the expectations of people about the future. Although the future is uncertain, calculated assumptions regarding future prices can affect the demand in the present. If consumers expect the prices to increase shortly, it is quite likely that the present demand will increase. Hence, the demand curve will shift to the right. An example of this situation could be the consumers waiting to buy rice shortly. They might not buy rice today because it is expected that the price will go down tomorrow and they’ll get rice at a cheaper rate than what it is today. There can also be an expectation about a rise in the consumer’s income in the future, which can create the same effect. If the income is likely to increase in the future, the consumers will spend more on the goods that they feel are expensive in the present, but with increased purchasing power in the future, they might be able to afford them.